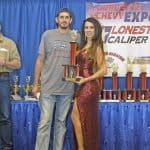 Bobby Sanford owns our feature Corvette.  It was on display at the 2018 Corvette Chevy Expo held at the Galveston Island Convention Center.  Bobby took 1st in the C4 Class with his 1996 Corvette Grand Sport. Bobby is currently serving in Afghanistan, so we wanted to pay tribute to him and thank him for his service by sharing his Corvette.

The run was to be limited.  The final production totals were 1,000.  Of those, 810 coupes were produced and 190 convertibles.  The car was named after the famous Grand Sport Corvette race cars from the early 60s.

The Grand Sport option (RPO Z16) had the LT4 engine and was only available with the 6-speed manual transmission.  This one-year-only LT4 engine was conservatively rated at 330 HP

To commemorate the 1963 Grand Sport Corvettes, they came with a special Admiral Blue paint and Arctic White racing stripe that ran down the center of the car and two red hash marks on the left front fender.

Special Grand Sport badging was placed on each side of the hood above the side fender vents as well as a unique chrome-plated Corvette emblem on the nose and gas lid.  Special chrome badging and the ZR1-style wheels were black spoked.

The cars have their own unique VIN sequence that is distinct from the other 1996 Corvettes.

There were two Interior color choices for the Grand Sport.  It was limited to all black, or a special Torch Red and Black combination . . .red seats and trim but with black carpeting.  The headrests were embroidered with the words “Grand Sport.”  There were 593 coupes with black interior and 217 with the Red/Black.  Of the convertibles, 137 had the Black, and 53 convertibles had the Red/Black.

Thank you and come home safe!  Also, thanks to all our veterans!  Thank you for sacrificing time, family, friends, and health to serve.